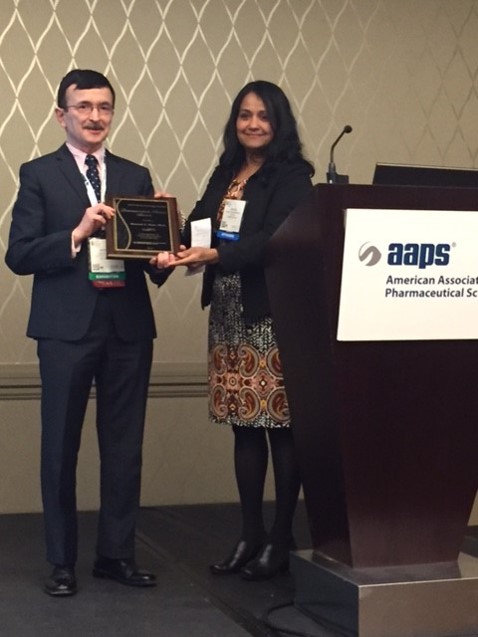 Alliance Pharma’s Vice President of Biopharma Services, Masood Khan, Ph.D., was honored with the BIOTEC Section Distinguished Service Award at the 2016 National Biotechnology Conference of the American Association of Pharmaceutical Scientists (AAPS). The AAPS Distinguished Service Award recognizes exemplary service as reflected in significant and extensive contributions that have materially influenced the advancement of the pharmaceutical sciences and the AAPS.

To date, Dr. Khan has over 120 publications and presentations, including several white papers related to issues in bioanalysis that focus on new technologies and biomarkers. One of these white papers titled, “Recommendations for adaptation and validation of commercial kits for biomarker quantification in drug development,” which was published in the journal of Bioanalysis (January 2015), offered a systematic approach to the assessment, method adaptation, and validation of commercial immunoassay kits for the quantification of biomarkers in drug development. Dr. Khan is also editor of a book titled, Ligand-Binding Assays: Development, Validation, and Implementation in the Drug Development Arena (2009)—a consolidated and comprehensive reference that is still used extensively in the pharmaceutical industry.

Dr. Khan has been an extraordinary volunteer, actively involved in AAPS over the past two decades, serving on a variety of committees, as well as organizing scientific short courses, roundtables, and symposia. Most notable is a roundtable that he organized at the AAPS 1998 Annual Meeting in San Francisco on the challenges of immunoassay validation and implementation in regulatory environment. This led to the publication of the first white paper on the industry perspectives on ligand-binding assay validation in 2000 and subsequently to the formation of the Ligand-Binding Assay Bioanalytical Focus Group (LBABFG), where he has actively served on the Steering Committee for over 8 years. He is currently acting as the Liaison of the BIOTEC Section Focus Groups.